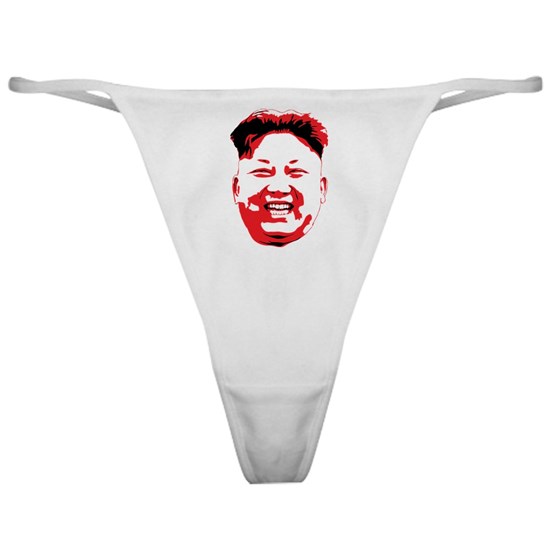 NOW YOU can shop a number of quirky Kim Jong-un themed pieces for the North Korea fan in your life.

All calendars, thongs, condoms and even sex toys are available with the smiley face of the mad nuke despot.

The 38-year-old may be a brutal dictator charged with multiple crimes against humanity, but that hasn’t stopped him from being emblazoned on all kinds of clothes and nick nacks.

For example, you or a loved one could become the proud owner of a Kim Jong-un thong, reduced from £20 to £15

Featuring a picture of a smiling Kim on the front, it’s available from US online retailer CafePress.

The description of this one-of-a-kind undies claims it’s 100% combed ring-spun cotton and “will make her feel a little more naughty than nice in the most understated and unique way.”

Meanwhile, the novelty condom website sayitwithacondom.com announces a prophylactic theme around the dictator of North Korea.

“Celebrate the Supreme Leader with his new Boom Condom,” the product description reads.

“Studies show that condoms are 98% effective in preventing pregnancy when used correctly. Studies also show that North Korea is 98% ineffective at launching missiles.”

Also on the steamier side is a Kim-themed sex toy, yours for the princely sum of £19.99 from Etsy.

For example, February includes a photoshopped photo of Kim holding a red rose in honor of Valentine’s Day.

December shows a smiling Kim alongside former US President Donald Trump, with Christmas holly superimposed on the page.

The leggings feature a repeated pattern of Kim in front of a North Korean flag.

Also for sale on Redbubble is a white miniskirt featuring the bully’s face on the back and on the front with the words “Send Nukes”.

The skirt is on sale for £29.32 and has received a number of positive reviews, with one happy customer writing: ‘Very cute and flattering my girlfriend loves it.

Etsy sells a wide range of Kim mugs, including one featuring a smiling Kim with the words “Live Laugh Love” above.

Another shows the iconic rainy hug scene from the 2004 film The Notebook starring Rachel McAdams and Ryan Gosling, but with the heads of Kim Jong-un and Donald Trump superimposed in their place.

A Kim washable face mask is also available for £8.99.

In December 2017, an international war crimes committee confirmed that the dictator had committed all but one of the 11 recognized crimes against humanity.

A newborn baby was fed to guard dogs in a gulag, starving prisoners were executed for searching the dirt for edible plants and religious minorities such as Christians were tortured, defectors say north -Koreans to the War Crimes Committee of the International Bar Association.

Up to 130,000 people were imprisoned by Kim in his network of labor camps.

His regime continues to broadcast a steady stream of propaganda, and this week a video of Kim riding a white horse was released by the Pyongyang Broadcasting Service.

A video from earlier this month shows Kim seemingly struggling downhill and looking much slimmer than just two years ago.

Regime propaganda claims the despot’s body was “utterly withered” last year from “suffering” for the people of his impoverished nation.

Photos of Kim from 2012 show how unrecognizable he was just months after taking power following the death of his father Kim Jong-Il.

Over the next few years, his obsession with cheese and compulsive consumption saw the 5ft 6in Kim ball 22 stone.

2022-02-06
Previous Post: The race for the Olympic mascots is on
Next Post: Fan merchandise company GB Eye plans to employ 100 people in Barnsley as it eyes global expansion