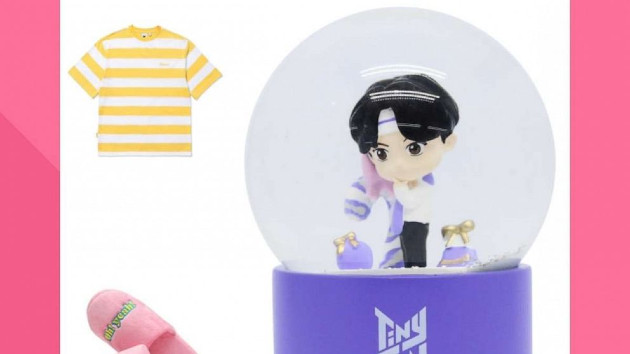 BTS merchandise has arrived at Nordstrom

(NEW YORK) – For all BTS fans, get ready. A real mic drop moment is on the way.

Nordstrom will launch a gender-neutral collection of items inspired by the Grammy-nominated South Korean band on February 25.

The BTS Themed Merch collection, produced by the group’s music label HYBE, will feature a mix of apparel and accessories with featured items such as snow globes, t-shirts and slippers.

To give fans the chance to join in on the hype surrounding the launch, Nordstrom is also celebrating at select stores with photo ops, snacks and music.

In addition to Nordstrom, limited-edition BTS merchandise will also make its way to PacSun and Zumiez on the same date.

While this may be one of the biggest merchandise collaborations, BTS-inspired items have also been featured at Urban Outfitters as well as CASETiFY.

Last summer, the famous K-pop group also teamed up with McDonald’s on two collections inspired by BTS songs and dishes from the fast-food chain.

2022-02-25
Previous Post: India must aim for $1 trillion each in exports of goods and services by 2030: Piyush Goyal
Next Post: Carter’s Furniture donates $25,000 in merchandise to Habitat for Humanity ReStore | Social services