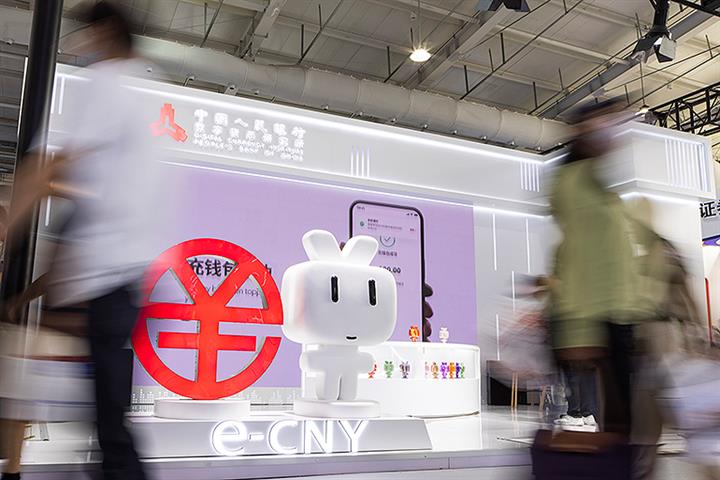 (Yicai Global) September 5 — Goods bearing an exclusive logo for the Chinese e-yuan were on display at the ongoing China International Trade in Services Fair to entice attendees to open digital currency accounts and spend them in goods.

Dubbed “Yuanyuan,” the logo was designed by a digital currency research institute at the People’s Bank of China, and the merchandise was created by banks participating in the trading event that ends today.

“I opened e-yuan accounts in several banks today to purchase the merchandise,” a participant told Yicai Global, after purchasing a number of items. “I heard about the digital yuan, but I had never used it before today. I found it really handy. »

Using e-yuan to open blind boxes, play claw arcade games, buy drinks and natural gas are some of the fun uses featured in the CIFTIS digital yuan exhibition area of ​​this year.

The first publicly available physical e-yuan card, described as a low-carbon card, was also unveiled at CIFTIS to provide an alternative to the usual payment method of using the digital yuan app on mobile phones.

The card, jointly issued by Bank of China and Chinese internet giant Meituan, can be used to pay quickly in different online and offline scenarios, including on public transport.

“I rarely use smart phones,” an elderly woman told Yicai Global. “So for people like me, this low-carbon card is very useful and convenient to use.” She got hers back from CIFTIS.

The use of the digital yuan is becoming increasingly popular. As of May 31, pilot areas in 15 provinces and cities across China conducted about 264 million electronic yuan transactions, worth about 83 billion yuan ($12 billion), according to official data.

Some 4.6 million retail stores support electronic yuan payments. And the numbers grew rapidly. By the end of June 2021, some 70.8 million yuan-denominated digital transactions had been made, totaling about 34.5 billion yuan, according to the latest government data.