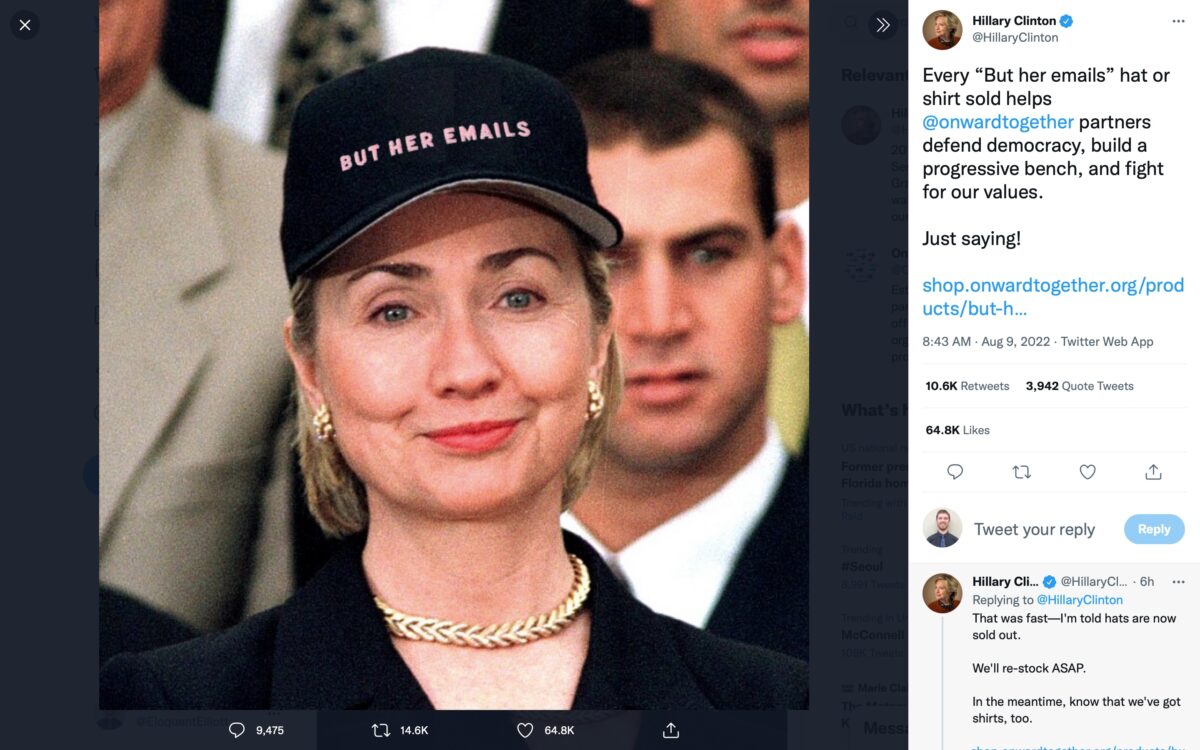 A day after the FBI raided the former president’s home, Clinton was selling shirts and hats with the phrase “But Her Emails” written on them.

Clinton used a private mail server to conduct official business with more than 2,000 of them classified by the State Department. She then deleted around 33,000 emails before government officials could investigate them.

An internal State Department investigation of Clinton’s emails found no “deliberate mishandling”, although it did find violations by 38 department officials.

Some of the estimated 15 boxes of documents the FBI seized from Trump have also been classified, the National Archives said.

In this context, Clinton raised funds by selling clothing referencing the email scandal.

“Every hat or shirt ‘But his e-mails’ sold helps @onwardtogether partners defend democracy, build a progressive bench and fight for our values. I’m just saying!” Clinton posted on Twitter.

“But Her Emails” hats and T-shirts sold for $30 each on the website of the progressive political fundraising organization Onward Together.

It also offered coffee mugs, pins, and stickers with the same phrase.

The hats sold out quickly, Clinton wrote on Twitter.

“It was quick – I was told the hats were now sold out. We will restock as soon as possible,” Clinton said. “In the meantime, know that we also have shirts.”

Clinton co-founded Onward Together after losing the 2016 election. He has donated to more than a dozen people who previously worked with her.

Previously, Clinton offered “But his emails” hats after “news that Trump was flushing documents down the White House toilet.”

Trump denied those claims and responded to the raid on his home with a scathing letter.

“Nothing like this has ever happened to a [former] President of the United States previously,” Trump said.

Trump said the FBI’s actions resembled those of a corrupt Third World dictatorship.

Jackson Elliott reports on small town America for The Epoch Times. He learned to write and research the truth at Northwestern University. He believes that the most important actions are small and that, as Dostoyevsky says, everyone is responsible for everyone and everything. When he’s not writing, he enjoys running, reading and spending time with friends. Contact Jackson by emailing [email protected]