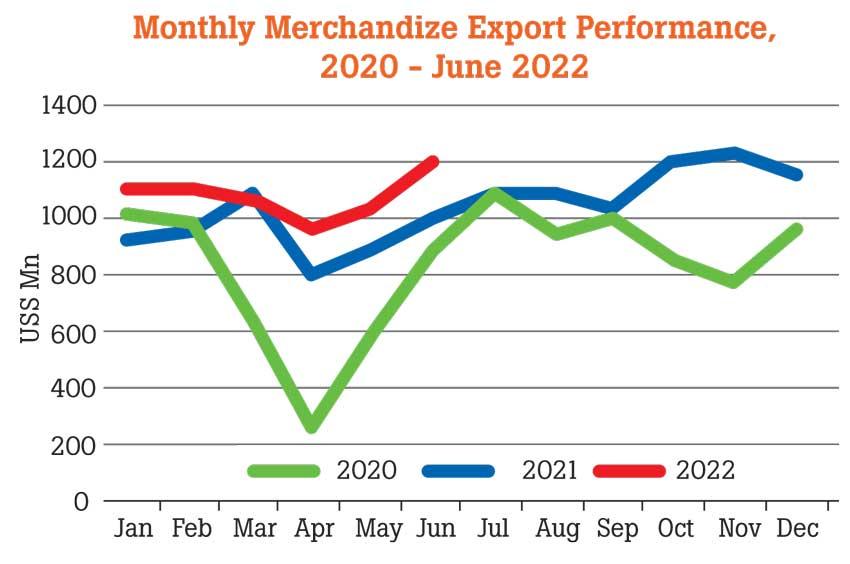 Courtesy of the Daily Mirror

Merchandise export earnings increased by 20% year-on-year (YoY) in the month of June, bringing foreign exchange earnings to
US$1,208 million.

The Export Development Board (EDB) attributed the increase in income to improved performance in exports of garments and textiles, rubber products, coconut products, food and drinks.
and seafood.

The monthly analysis carried out by the EDB shows that the export earnings of kernel, fiber and shell products, classified as coconut products, increased by 30.15%, 1 .63% and 21.3% in June 2022 compared to June 2021.

Electrical and electronic components revenue increased 5.71% year-on-year to US$39.82 million for the month under review. The good performance was observed in exports of insulated wire and cable (14.5%) and switches, boards and panels (23.55%).

However, tea export earnings in June 2022, which accounted for 12% of merchandise exports, contracted by 5.99% compared to the corresponding month of the previous year. The reduction in bulk tea exports, which was only 10.99%, caused the sector to bring in an income of
US$116.49 million.

The dismal export performance was also seen in the spices and essential oils segment, where revenue fell 10.9% year-on-year to US$31.74 million.

Cumulative analysis shows that for the six months ending June 2022, merchandise exports increased by 12.4% to $6,408.3 million compared to the corresponding period of 2021. Major product sectors , with the exception of tea and spices and concentrates, recorded an increase in exports.

Meanwhile, the estimated value of services exports for the first half of 2022 was US$1,337 million, up 45.72% from the corresponding period of 2021. EDB include ICT/BPM, construction, financial services and transportation and logistics.

Data shared by the EDB revealed that strong export growth was recorded for the top five export markets during the month of June 2022 and the period from January to June 2022.

In June 2022, exports to the United States, Sri Lanka’s main export destination, increased by 46.16% to reach US$323.65 million compared to June 2021. The best performance was driven by an increase in exports of clothing and textiles (29.68 percent) and coconut products (26.8 percent), the EDB said.

For the period January to June 2022, exports to the United States increased by 24.54% year-on-year, reaching US$1,687.73 million.
The UK and India rank as the second and third largest export markets for Sri Lankan exports for the month of June 2022 and the period January-June 2022.

On a comparison by region, exports to all regions except CIS countries increased in the month of June 2022 and the period from January to June 2022 compared to the corresponding period of 2021.