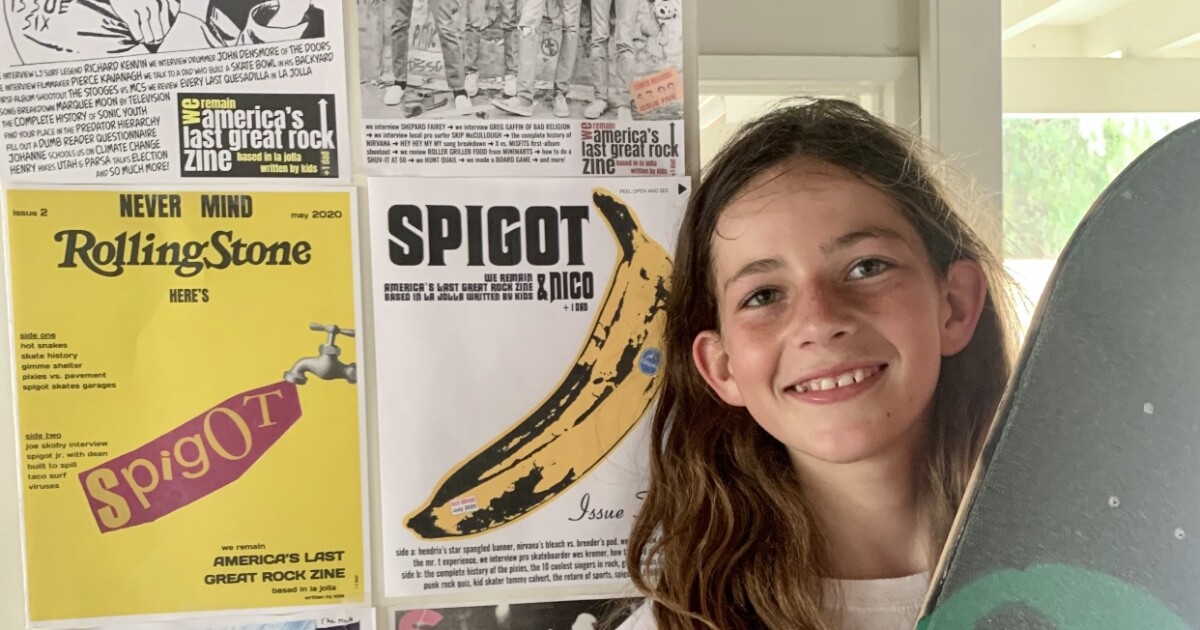 Jollan Lucas Leaverton turns her passion for tricks on her skateboard into entrepreneurship to help spread her message that skateboarding encourages community and creativity.

Lucas, who is 12 and in sixth grade at Muirlands Middle School, started skateboarding a few years ago. He developed a taste and talent for street skating, a trick-oriented style, last year at the start of the coronavirus pandemic.

He has also started a magazine dedicated to local surfing and skateboarding culture, as well as a business gearing up to sell stickers, shirts, and other skateboard-related merchandise.

Lucas said: “My dad actually taught me a lot of stuff. It really got me going because I had all this time to learn and try things,” with the school closed to in-person instruction due to the pandemic.

Lucas said he loves skateboarding because “it’s different from other sports.” He has “options for creativity and new ideas and although football has lines, limits, you cannot cross the limits,” he said.

In skating, “there are no borders,” he says. “You can go anywhere…and you can use things that most people don’t really expect you to use in different ways,” like a ledge or a sidewalk to perform tricks like a grind, in which a skateboard is slid along a surface.

“Most people would think of climbing stairs,” he said, but skateboarders look at the same stairs and think of multiple ways to go up or down. Skateboarding “opens up these new opportunities that most people can’t really see.”

Lucas said he skateboards for hours every day, mostly staying on his street, where his family built a “mini skate park” in front of his house with rail bars and a shredder box.

He and his friends occasionally skateboard in various parking lots around town, he said. “Sometimes if you skate too much in one area, it gets bland and you have to find new places to do new things.”

Lucas said he also sometimes has to find another place to skate when a neighbor is “screaming at us.”

“A few people think skateboarders are punks, mean and disrespectful, but that’s not really the truth,” Lucas said. “Most La Jolla skaters aren’t like that. You have to show them you’re not.

Lucas said skateboarding has been a way for him and others to build community during the pandemic because it “brings everyone together” while being designed for social distancing.

“Instead of pitting everyone against each other and making it this competitive sport, it’s more like everyone is in it and everyone wants to do a good job,” he said. declared.

To share and promote skateboarding and his other interests, Lucas started Faucet, a “music/skate/food/humor magazine”, with articles written by Lucas and his friends and aided by Lucas’ father. It’s available at La Jolla stores such as Smallgoods and Bird Rock Surf Shop, Lucas said.

So far, six issues of Faucet have been printed. Lucas wants to be a journalist one day. He interviewed local surfers such as Richard Kenvin, Skip McCullough and Jacob “Zeke” Szekely, as well as skate pro Wes Kremer.

“We hope it becomes something; we might go to the stores,” he said.

Lucas hopes to see a dedicated skate park come to La Jolla. “There are 56 skateparks in San Diego County, none in La Jolla,” he said.

“I feel like if they just spent a few thousand dollars and built a skate park – it doesn’t have to be large scale, it just has to be a small skate park – that would be really awesome and really fun for everyone. ◆