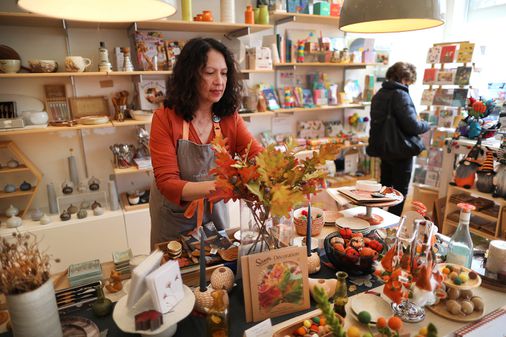 With inflation fears and a surplus of unsold goods, the Black Friday season has already begun

Stores are currently handling a record $732 billion in unsold merchandise, a 21% increase from 2021, according to the Census Bureau. Truly, a “stock boom,” as Urban Outfitters CEO Richard Hayne put it during an earnings call in August. And in a tougher economy – with high inflation and the threat of a recession looming – consumers’ appetite to spend is waning.

For retailers, it’s another painful twist in what has been difficult for more than two years since COVID hit, said Jon Hurst, president of the Retailers Association of Massachusetts.

“You can feel the pandemic is still with us,” he said. “The challenges just changed.”

After battling shortages since March 2020, top brands say warehouses are now abnormally full. Target canceled orders from suppliers as early as June to reduce inventory. Nike says its North American inventory rose 65% in the three months ending August 31. A few stores, such as Gap, rely on a “pack and hold” strategy by stocking surplus items to sell later in 2023.

But most retailers have responded to the glut the old-fashioned way: by discounting early and often. Amazon held a second Prime Day event on October 11 and 12, and half-price deals are popping up everywhere from Walmart to J.Crew. Wayfair, the Boston-based e-commerce giant, will launch a two-day sale event next week with markdowns of up to 80%. Express Inc., a clothing retailer, is stocking its outlet stores with last year’s holiday items and New Year’s dresses, the company said in September.

Plus, the dreaded (by some) “holiday creep” is already here. It’s not even Halloween, but store shelves are full of turkey-shaped table decorations. Kohl’s sells stacks of pine-scented candles, long before the holidays they tend to evoke.

“A few years ago, I started saying, with some precision, that Black Friday starts on Labor Day,” said Mark Cohen, director of retail at Columbia Business School. “But this season has started earlier than ever.”

The drastic discounts appear to be stores’ last ditch effort to get rid of products they ordered months ago to avoid supply chain delays, Cohen added.

“This mad rush to get supplies was definitely outside the normal course of behavior” in 2021, he said. “Now stores are left with broken balance sheets and overburdened stores, desperately hoping to fix the problem.”

Small businesses that source from the United States tend to be better insulated from supply chain issues — and resulting overstocking — than big-box stores, but they also face challenges.

Linda de Valpine, owner of homewares store Newton Greentail Table, returned to trade shows to stock up this year after a long pandemic break. But now selling all those rust-colored table runners and foliage place cards has become a point of stress. She needs to clear out her fall inventory to make room for Christmas cookbooks, and the money from those sales will fund stock for spring and summer.

“I have a lot to get rid of before it’s time to get the holiday supply out in November,” de Valpine said. “It’s also nerve-wracking, because every day you listen to the news and the focus is on the question, ‘Are we in a recession? You can’t help but be apprehensive.

Beyond supply chain challenges, the unstable economy is disrupting consumer habits. Soaring inflation has forced shoppers to spend more on gas and groceries and less on non-essential items, such as furniture, clothing or clothing. The higher cost of dining out, travel and transportation eats up more of the discretionary income people have. Rising interest rates and fears of recession fuel concerns that people can cut spending as the New Year approaches, and a report by consultancy Bain and Co. found that shoppers overall feel less satisfied with the state of retail.

So even though dollar sales are up this holiday due to inflation, retailers aren’t seeing an increase in transactions, said Aaron Chervis, head of retail for the Americas at Bain.

“If you look at the numbers first, it’s like wow, this might be the third best holiday season in 20 years. But that’s in nominal terms,” he added. “In real terms, this could be the worst holiday of the last decade.”

That’s what Robin Gerolamo, founder of the Winthrop Robin’s Nest gift shop, fears. She has avoided cutting her specialty inventory — sets of Fenway Park coasters, charcuterie boards and gold-tinted jewelry — even as major retailers cut prices. So far, customers are arriving at a normal pace, but Gerolamo has prepared for the worst-case scenario: the possibility of buyers walking away when it needs them most.

“You can feel the worry in the air,” she said. “Everything costs more. But if I raise my prices and people stop shopping, it’s devastating to my livelihood. If I lower them too much, it is also devastating.

Patti Bergstrom of Gardner’s The Velvet Goose feels the same way about discounts. Many small businesses like hers don’t have the same mass of inventory to manage as Target or Walmart, she said. One of its suppliers, quilted accessories brand Vera Bradley, recommends a host of offers: Get a free lumbar pillow. Buy this tote for half price, if you’ve already spent $100.

“But that’s not my style,” Bergstrom said. “I fill a niche. I sell specialty items. Hopefully people will keep shopping for it.

Among them profiting from the overall inventory are low-cost retailers, including Burlington Stores and TJX. They collect excess products and deliver them to customers at low prices. In a recent earnings call, TJX reported that “merchandise availability across the good, the best, and the best brands was exceptional.”

The company’s CFO reiterated that in August, “We’re going to have some of the best branded content we’ve had in a while.”

So, as people deal with soaring electricity bills and record-breaking rents, a rebate from retailers is at least something to look forward to this holiday season.